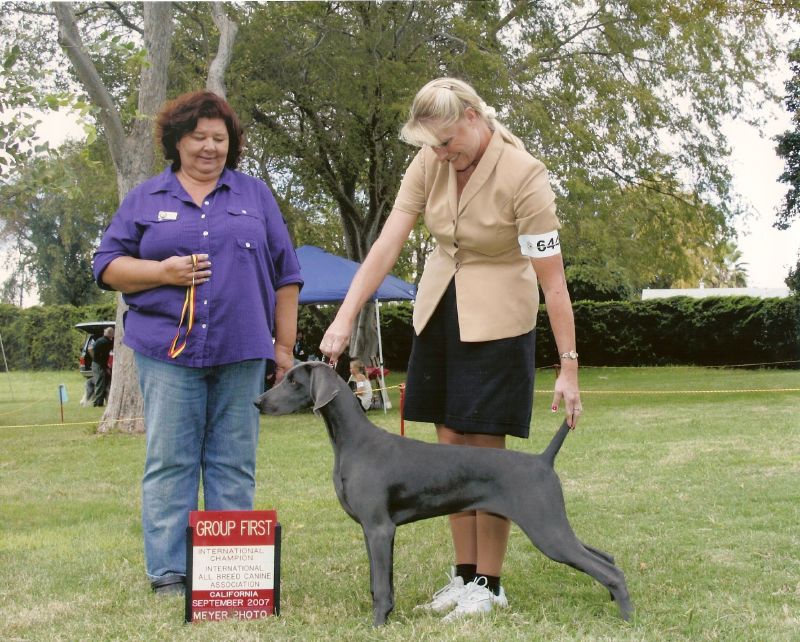 I’m sure that many of you won’t know what all this means. In fact, I’m still trying to figure it all out. The main thing you need to know is that we did exactly what we set out to do. Earn Roxie a title. Although, I think we have caught the fever because now we are planning to go back and earn her the title for the next age group all the way until we earn her an adult title.

Roxie is now Nat/Int BA Fairhaven’s Blue Sky’s the Limit J. After earning 4 out of 4 SG1 ratings (VERY GOOD, highest a puppy can receive) she earned her National/International Baby Championship!

It seems that on day 1 she was competing against a 4 mo old Viszla and 4 mo old GSP and in both show’s all three placed in various orders. Day number 2 was harder on all of us and group was taken by a Flat Coat Retreiver in Show 3 and then the Golden took Show 4. Overall, it was the same six dogs in each of the 4 Sporting Group shows. No one won twice.

She was also entered into the Best Rare Breed but lost to some dog I have never seen before. A BIG ONE!

We had a Canadian judge, 2 USA judges, and a USA/UCI Int judge. The USA judges are important as we would like to see the blue Weims be able to show in AKC shows some day.

Here is a link to the pictures taken this weekend. http://www.flickr.com/gp/66999112@N00/617mDP Each photo tells which show and what is going on also says who the winner was.

About the International show… Unlike the AKC shows (which I know nothing about) each dog is judged against the UCI breed standard not against the other dogs. Each dog is given a written critique along with a rating. The highest rating a puppy can get is SG1. If you earn 3 of those, you earn a National title. If you earn 4, you earn the International Title. If multiple dogs are entered, each of them can earn an SG1 but will be assigned a letter (a,b,c) the winner of (a) moves on to group. At which point it’s each dog on it’s own. No more written critiques are given. If you are interested in learning more about the International show, you can go to: http://www.iabca.com