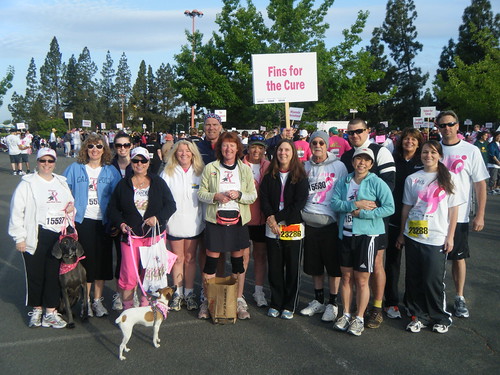 Team Fins for the Cure Last Saturday, for the fifth time, I participated in the Susan G. Koman Race for the Cure.  Since doing the Komen race for the last five years, I have had so many friends have loved ones be diagnosed with breast cancer.  I have been fortunate that it has not reached my family… yet.  With 11 nieces, I pray that a cure is found before it has a chance to ever effect them.  Thank you to everyone who sponsored me in this year’s race.  Because of you, I raised $1,250!!  What does that mean?

In addition to rasing money and supporting thousands of breast cancer survivors, and sharing the day with my mom, I made this year’s race extra special. I decided to RUN it instead of walk it.  Over the last couple of years, my digits (weight) have slowly increased.  I thought that being unemployed would motivate me to take the extra time and exercise, however I didn’t. When I finally decided to do something about it, I had already registered for the 2011 race and planned to walk with my mom as usual.

If you’ve watched any episode of The Biggest Loser you have seen VERY overweight people running half and full marathons.  I personaly have multiple friends who have taken up running.  I have never considered running because I have always been asthmatic when exercising so I never tried.  After seeing so many people do it, I decided I would give it a try.  I downloaded an app for my iPhone (C25k) which is a nine week program which takes you from couch potato to running a 5k.   From the time I made the decision, it was 9 weeks to race day which meant if I was going to do it, I needed to start ASAP.  So I asked a friend to run with me to help me stay motivated and started the next day.

For 8 weeks, I ran 3 days a week with (and without) my running partner and Roxie building my lungs and legs.  The week before the race, I realized I had miscalculated the number of weeks and had only gotten to the point of running for 25 minutes straight, which was just over 2 miles.  How on earth would I run for another 15-20 minutes and another mile on Saturday????  So for each running day, I added five minutes to my run and prayed that the excitement of race day would carry me through.

I had lots of encouragement from friends, family as well as advice from fellow runners.  I knew I could do it and I was excited.  The night before race day, I didn’t sleep very well.  I tossed and turned all night dozing here and there.  When the alarm went off at 5:00 am, I was wide awake and ready to go.  Upon arriving at CalExpo and meeting up with my team members, I anxiously awaited the time to head for the starting line.  Me and several other runners headed over just before 7:30 and awaited the count down.

Slow and easy was the advice I was given.  Don’t let the excitement get you going too fast so you don’t peter out too soon.  It was time.  3…2…1…. GO!!!  I started my Nike+GPS iPhone app so it would track my time and distance and started to run.  10 feet later, we all stopped.  Apparently we just closed in the gap of space between people while the first runners headed out.  Waiting… Waiting… ok GO!  and off we went.  We (me and Roxie) started out slow, trying to get into a rhythm and steady pace while all the people around us passed us.  As we rounded our first corner, I thought to myself, “this is it.  I’ve been training for weeks for this moment and here I am, running in my first 5k.”  I started to get a little weepy.  This is something I NEVER thought I could do and I was doing it.

As I approaced the Mile 1 marker, I thought to myself, “ok,  1/3 of the way there.  I’m ok, I can keep going.  I stopped at the water station to give Roxie some water and me too then kept going.  On the way to Mile 2, some of my team members passed by going the other direction and cheered me on as they passed.  That was encouraging.  Then I came to the Mile 2 marker and the cheerleaders where there to cheer us on and high five me as I passed through.  I stopped again for a few seconds for water again and kept going.

A little over 2 miles is the furthest I had ever run at one time so now I was in unchartered waters… err roads.  I was feeling ok, lungs were ok, but my feet were getting tired and sore but I just kept thinking to myself, “I can do this”.  Since I knew the course from previous years, I knew that I was getting close to the end.  As I rounded the corner I could see the Mile 3 marker and was excited to be so close.  5k is actually 3.1 miles so I still had a few yards to go before actually finishing.  The guys on the stage at the finish line were cheering us on and said “If you pick up the pace, you will finish in less that 53 minutes!”  So I did.  I pulled every last bit of energy I had and picked up my feet and willed myself to run stronger, faster.  I said to Roxie “come on Baby, let’s go, we can do this.  Let’s finish this thing.  COME ON!”  As I came to the finish line, I saw my friends on the sideline waiting for me and cheering me on.  I raised my fist and pumped in pride as I crossed over the finish line and they snapped a photo catching my historic moment. Once I crossed over I headed straight for the water table and to try to catch my breath.  One of my friends came to meet me there and hugged me and I was so excited.  We walked back to our meeting place where the rest of the runners met me to congratulate me.  By this time, I could feel that my legs were tired and I knew I was going to be sore.  I rested for a few minutes, watered the dog and myself, ate some cheese and regained my composure.

After a few minutes, I headed backwards up the course to try to find Mom and walk the rest of the way with her.  Along the way, I passed the walkers in my team as well as several other friends who were walking as well.  It’s not hard to see me and Roxie, she’s pretty noticeable.  Once I found her, about a half mile back, we headed towards the finish line… again.

It was an amazing day.  Goals set, reached and surpassed both with my fundraising efforts and my personal running goal.  Click below for slideshow from the day.  More photos to be added as  they come in. 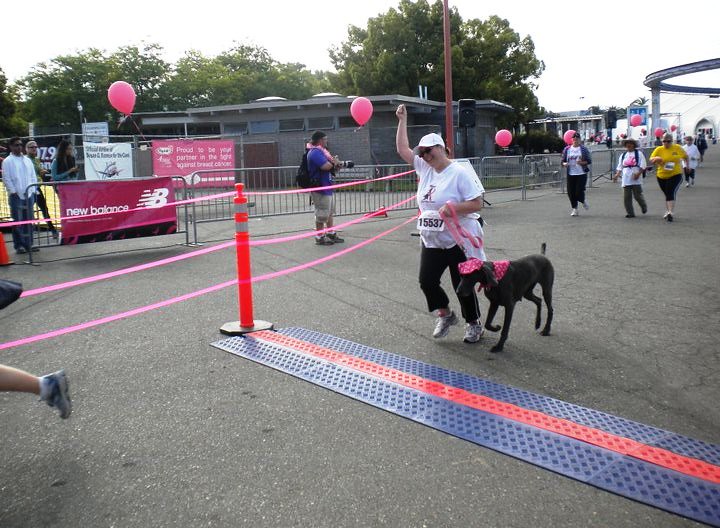